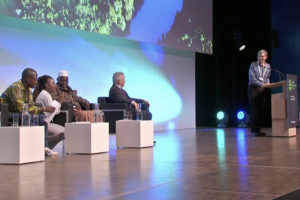 Australian agronomist, Tony Rinaudo, recently received the 2018 Right Livelihood Award, often called the Alternative Nobel Prize, “for demonstrating on a large scale how drylands can be greened at minimal cost, improving the livelihoods of millions of people.” The Award recognizes courageous people and organizations offering visionary solutions to the root causes of global problems.

Rinaudo, also known as ‘the forest maker’, discovered an underground forest of roots in the deforested and largely desertified region of the Sahel in Africa, realizing that the stunted desert shrubs on farmlands were in fact the new sprouts of trees that had been cut down. This led to his development of a low cost, rapid and scalable method of regenerating tree cover, by pruning these shrubs and nurturing them into majestic, full-canopy trees. This process has regenerated agroforests across the drylands, simultaneously reversing desertification, providing nutritious fodder for livestock, fuel wood and timber for building. This method, called Farmer Managed Natural Regeneration (FMNR), has increased crop yields, soil health, and helped to combat the effects of climate change.

What Tony has created is much more than an agricultural technique; he inspired a farmer-led regreening movement that is now spreading across Africa. More than 22 African countries are now using FMNR – and it has the potential to be used throughout dry landscapes worldwide.

“If Niger, one of the world’s poorest countries, with an extreme climate on the edge of the Sahara Desert, with minimal NGO and government efforts, or funding, can restore 200 million trees on 5 million hectares over a 20-year period largely through a farmer-to-farmer movement, what would be possible if all stakeholders—donors, scientists, governments, policy makers, business, NGOs, traditional and religious leaders and farmers—partnered and were serious about land restoration? Technically, there is no reason why 50 million hectares of land could not be restored in multiple countries within five years” says Rinaudo.

“Most people don’t realize that protecting the environment can help reduce hunger,” Rinaudo says.  “Having trees on your land, or forests nearby, helps improve soil fertility, reduces rain runoff and boosts crop yields.”

Rinaudo today gave a keynote address at the Global Landscapes Forum in Bonn, Germany.  “Why not mount a global regreening revolution the likes of which the world has never seen before – one which addresses multiple issues simultaneously, and with no regrets, no down side?”, he said.

Since 2012, Rinaudo has been working with a group of leading research, technical and development organizations from around the world, to establish massive-scale projects and movements aimed at restoring degraded land and improving food production in the face of climate change.

In recent years, this group, now called the Global EverGreening Alliance, has developed some of the largest coordinated grassroots restoration efforts ever undertaken, and is currently working with the United Nations Environment Program and the African Union to develop more new programmes that could solve some of the world’s most urgent climate change challenges.

The Alliance is also working with ESRI and KPMG to develop a web-based platform to visually track the spread and the impact of land restoration efforts in near real-time, using a combination of high-resolution satellite imagery and mobile phone applications.  The platform will be freely available, and will allow governments and others to witness the contributions of projects towards regional and global restoration and climate change targets.

Dr Dennis Garrity, Chairperson of the Alliance and United Nations Drylands Ambassador also gave a keynote address today at the Forum. “Almost a third of the world’s human-induced greenhouse gas emissions come from agriculture and land use changes, but with EverGreening practices we now have the demonstrated ability to make farming systems carbon neutral. This is huge, and should inspire us all! Rather than contributing to the problem, agriculture can become a major part of the solution – through agroforestry”, said Dr Garrity.

Rinaudo is currently preparing for the third Beating Famine Conference, to be held in Mali in February 2019.  This conference will provide an opportunity for regional learning and collaboration, building on existing successes to rapidly increase the uptake of EverGreening practices such as FMNR across Africa’s dry Sahelian Zone.

Climate change is usually a topic that generates reports of increasing doom and gloom. Rinaudo, Garrity and the Alliance give us hope for a future – that not only provides relief for developed nations, but for the people across the developing world who are the most vulnerable to droughts and floods, and are already suffering the effects of climate change and land degradation.